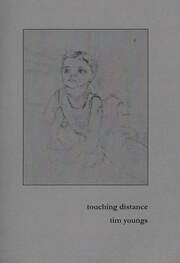 'Tim Youngs’ seventeen poems in this pamphlet from Five Leaves resonate with a deft, quiet passion to satisfy all poetic sensibilities, save the florid and rhetorical. That deftness is apparent also in the ordering of poems, the structuring of the pamphlet.' (Adrian Buckner)


My debut poetry pamphlet, Touching Distance, was published by Five Leaves in November 2017. Its cover image is a detail from a drawing by Gurminder Sikand
Many of its 17 poems (around half of them previously unpublished) have travel as their subject, some focusing on journeys through time, back to childhood. It is available here.

Travel writer Tim Hannigan has described its contents as 'delicately formed poems of home and away, some quietly sad, some very funny, all very good indeed.' Poet and lecturer Adrian Buckner in a review here has described it as 'a first pamphlet collection that showcases a mature poet.'

My poems have also appeared in several print and online magazines, including:

I am co-editor with Sarah Jackson of an anthology of travel poems, In Transit, published by the Emma Press in 2018. Details are here. A review by Merryn Williams, describing it as 'a fine little book which may well inspire you to write your own poems about travelling', is here.